After putting my Drake 2B on 30 mtrs I immediately started looking for a matching transmitter.  The trouble is, the WARC bands like 30 mtrs weren't created until about 1980, long after the novice requirement for crystal control had gone away. By then solid state VFO controlled transceivers were becoming the typical rig. I'd need to homebrew a transmitter if I wanted vacuum tubes and crystal control on 30 mtrs.

A search of the QST archives brought up three articles that helped me decide what to do. The first was WD8DQT's article in January 2012 showing how to use today's HC49 crystals in simple MOPA (Master Oscillator - Power Amplifier) transmitters. The other two, W1TS's in October 1968 and WD8DAS's in January 2003 each show 6C4 to 5763 MOPA designs that can be modified per WD8DQT's article to use HC49 crystals.

I already have a crystal controlled MOPA transmitter on my desk. See https://w0vlz.blogspot.com/2008/02/further-6j56l6-transmitter-developments_5846.html . I did a quick check and found that the 6J5 I used is a close match to the 6C4 WD8DQT based his article on. I could start with the 6J5-6L6 transmitter I already had.  First I added a VR-105 and 12K 5 watt dropping resistor to power the 6J5 oscillator at 105 VDC. Next I converted the PA to a pi network instead of link coupled output. The tank capacitor is now 140pF and  the output/antenna capacitor is now 300pf plus, optionally, an additional 300pF. The coils on 80 and 40 are the same B&W output coils I've been using but without the output link connected. For 30 mtrs I searched through my junque box and found a coil that loads up fine on 30. Finally, I found HC-49 crystals, including 30 mtrs, five for $7.50 on ebay. See https://www.ebay.com/sch/possumlodge/m.html?_nkw=&_armrs=1&_ipg=&_from= 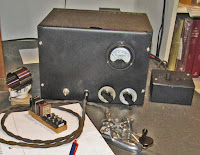