Handbooks on the web

Several ARRL (and Radio) Handbooks can be downloaded from the web ...

Many years of the "Radio Handbook" are at https://www.americanradiohistory.com/Radio_Handbook.htm

For ham radio magazines including QST, CQ and Ham Radio go to americanradiohistory.com .  In the upper right corner click on DX logs – SW Ham.  From there you will see many many classic radio magazines that you can download.

My shack continues to be in a state of flux, Nothing is built just once. As I rethink things, stuff is added or changed.

In this case I decided to pair my 6J5/6L6 transmitter up with my HRO Sr rather than my Simple Superhet. I wanted something of the right design vintage and looks to sit next to my HRO while running either barefoot or driving my TZ-20 amp. The core design of my 6J5/6L6 transmitter is right out of a 1940 Stancor manual so the design was fine. It just didn't look like it belonged with the HRO Sr. What I did was a cosmetic change replacing the front panel and then repackaging the transmitter in a metal cabinet. 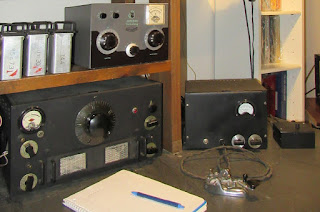 If I ever need a more upscale transmitter in that spot I have a Meissner Signal Shifter waiting in the wings.
Posted by Niel - W0VLZ at 11:16 PM 3 comments:

Many identify the Novice Class between 1951 (when it was introduced) and the early 70s (when VFOs, 250 watts and renewable licenses became part of the novice license) as the golden or classic era for novices. During the 50s and 60s the novice class was clearly a learner class. During this time amateur radio manufacturers marketed rigs specifically designed for novices.

I have two that I would call bookends to this classic era. One is the Hallicrafters SR75 introduced in 1951 just as the Novice Class was introduced and the other is the Heathkit HW16 (1967-1976). Both of these are transmitter/receivers in the same case with features and capabilities that match the restrictions of the 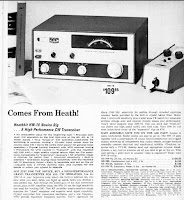 Novice Class. Hallicrafters chose the add a crystal oscillator to a S38B along with circuitry using the 50L6 audio amp as the transmitter final. The resulting rig looks, from the front, almost exactly like a S38B. Performance and usability would have been disappointing.The transmitter was only rated for 10 watts and changing bands or the crystal required removing the back of this AC/DC set. Also the SR75 receiver section was basically a S38B, an entry level receiver that many beginners would already have had. In addition the price delta between the S38B and SR75 was $40. Several crystal controlled transmitters were on the market in the early fifties in this price range that would have looked better to the novice and he could build his own transmitter even cheaper. By the time Heathkit tackled this particular niche in the mid 60s they designed a rig from the ground up that had features better tuned for the novice.

Two bookends on an era but Heathkit did a better job. I'm using my HW16 while the SR75 remains a shelf queen good for discussion.

After missing the AWA Bruce Kelley 1929 CW Party I'm looking forward to the vintage ham radio opportunities still coming up over the next few months:

I've six stations that I should have on the air for these events.


These will all be a great activities for those long cold Minnesota nights I'm expecting.
Posted by Niel - W0VLZ at 8:23 AM No comments: