After some quality table saw time, a bunch of drill press time and eight coats of paint (primer coat, satin black, three coats of wrinkle paint that didn't wrinkle and three more coats that did) I have a wood and aluminum chassis that looks pretty good. The layout is much like the Gross CW-25 but without the buffer stage. In place of the middle/buffer tuning dial I'm mounting a plate current meter. Across the bottom are three 1/4" phone jacks. One is the key jack. The other two are in the B+ circuits of the oscillator and final amp stages. These two jacks will have 350VDC exposed on the outside rim. For safety I recessed these jacks 1/2" behind the front panel. I also added a B+ switch on the far right.

I found two more examples of this tube lineup. One is a George Grammer construction project covered in November 1932 and February 1933 QST. The second is the Collins 4A transmitter. 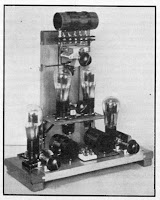