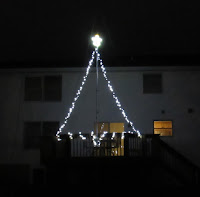 Each year around Thanksgiving through about New Years I give up my 40 mtr vertical. That vertical makes a great support for our Deck Christmas Tree Lights and the timing fits fine between the AWA Bruce Kelley '29 CW Party and the ARRL Straight Key Night.

Another BK is in the log. This year I worked ten other '29 stations. K0SM/W2ICE was worked outside of the party hours so Andy does not show up in my official BK log.

It was interesting that half of the '29 stations I worked were in MN and they all had, by far, the strongest signals. My 80 mtr antenna is only 15' off the ground. I suspect it was working well as a NVI antenna covering the "locals" fine. After trying all I could think of to clean up my 40 mtr signal I still wasn't satisfied so I stuck to 80.

My BK station stayed pretty much as planned for the first part of the BK using my new push-pull Colpitts and 1940 homebrew simple super but I felt I wasn't hearing as well as I might plus I was having trouble zero beating my own signal. I cobbled in my Drake 2B after the first night.  It helped but contacts were still pretty slow. I also noticed a lot of signal wobble because of wind. I see all of my MN compatriots are running MOPAs. They may have a point.