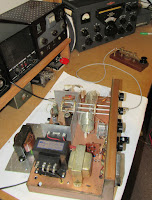 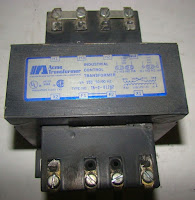 What I found was a 120V to 480V @ 150VA industrial control transformer. Obviously it didn't have a filament winding but I decided I could live with a separate filament transformer. I changed the '720 rectifier to a silicon bridge rectifier, added a 10 mfd cap to the input of the power supply filter and installed

a "back porch" for the filament transformer. Now under load 530 VDC is delivered to the 6146 instead of the specified 560 VDC...close enough to go on the air at 75 watts input. It tests out just fine. Now I have a couple of minor cosmetic changes before I pair it with my NC-303.