After seeing my 1934 transmitter a friend asked if I was doing anything special for the Bruce Kelley Memorial 1929 QSO Party coming up in December. Last year I put my TNT transmitter and SW3 on the air. This year it might be interesting to try a Hartley oscillator. 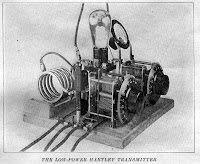 ore rigorous standards, the ARRL encouraged hams to improve their stations. One improved transmitter design was a single tube Hartley oscillator described by Ross Hull in the August 1928 issue of QST. Bruce Howes, W1UJR, covers this design on his web site here.

I've been searching through my junque box looking for the parts I need. The first step was a parts list and an enlarged scan/photo of the transmitter. After picking thr

ough multiple boxes and peanut butter jars I've lots of possibilities. Now it's a matter of sorting through what I have for the parts that match the original design.

This last weekend we planned a campout at Frontenac State Park. We've picniced there several times but have never camped over night. No camping trip packing list is complete without my K1. (This time we did forget the blankets and pillows but the K1 was loaded.)

I ended up getting several chances to ham. After a quick listen on 20 and discovering the CQ WW RTTY contest in full swing I moved to 30 mtrs for the weekend. The antenna was a 45' endfed wire (1/2 length wave on 30 mtrs) in a tree next to the campsite. It was approximately broadside to the NNE but did a great job into the northeast US. Between Saturday and Sunday I worked W3XAF (MD), KB3TJS (MD), W0IMD (CO), AA3TH (PA), WA1IIE (ME) and KD3DK (PA).
Posted by Niel - W0VLZ at 8:07 PM No comments:

Remember the safety problem with my 1934 transmitter? Two of the phone plugs is for metering and the third is for the key. If, in the heat of the moment, I get the them mixed up and plug the key into a B+ metering jack, I'll have up to 300 volts on the key.

To protect myself I tied a length of string and a plastic cable clamp to the key phone plug (any lump of plastic would work). After the key is plugged in I slide the cable clamp u

nder the front edge of the transmitter. The string is short enough that the plug can not be removed without getting the clamp out from under the transmitter.
Posted by Niel - W0VLZ at 8:27 PM 1 comment:

Also shown in the picture is my iambic keyer set up to key older tube rigs.
Posted by Niel - W0VLZ at 10:55 AM No comments:

transmitter, powered it up and it works! With about 300 volts

on the plates of the 46s

One change I made from the Bill Orr design is to connect the 47 screen to regulated 150V rather than a resistor network off of B+.

This transmitter is not without some personality, though. Only the amplifier stage is keyed so the oscillator stage runs continuously. On key up any energy from the oscillator that makes it to the antenna will be heard as a faint back wave. We'll see if this is objectionable. The second personality trait is, unfortunately, pretty nasty. When using the rig, two phone jacks are for metering plate current and the third is for the key. If in the heat of the moment I get the three mixed up and plug the key into a metering jack I'll have over 300 volts on my key. To make matters even worse, keying the metering/B+ line works so I may not even be aware of what I've done until I get myself between the key and ground. I'm planning something that will keep me from accidentally removing the key plug.

Eventually I plan is to mate this transmitter with my National FB7X for a complete 1934 station that I'll use in the 2010 AWA Linc Cundall OT CW Contest.
Posted by Niel - W0VLZ at 10:54 PM No comments: