What can be done about the high voltage at the key terminals?

- Keep your fingers off the key terminals: I've been doing this up to now. It usually works but my wife worries that it does not always work. It also follows the "If it hurts don't do it" rule.

- Covered Key Terminals: Several military keys and even some bugs are available that hide the terminals. This is a workable low tech solution but you have to find a suitable key or bug. One option today is the Bencher RJ-1 sold by Vibroplex ( http://www.vibroplex.com/contents/en-us/p202.html ).

- Mechanical Relay: Use your key or bug to operate a relay that is actually keying the rig. I've never tried this but it appears that speed may be an issue. How well does the relay keep up?

- Electronic Isolator/relay: I used a "Keyall HV" from Jackson Harbor Press / WB9KZY. The Keyall HV includes an opto-isolator and MOSFETs rated for 1000V at 3 Amps. Besides low voltage at the key terminals it is also low current so it can be used to interface a modern keyer to the heaviest of our cathode keyed boat anchors. See http://wb9kzy.com/keyallhv.htm for details.

The Keyall HV kit includes five parts and a small printed circuit card. This kit is just about as simple as one can get. Instructions are on the Jackson Harbor Press website. 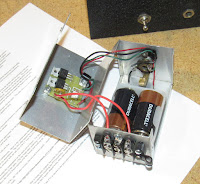 I used a small aluminum utility box for my keyall housing. I could have used a smaller box but the only two battery battery holder I had was for type C flashlight batteries. The batteries needed all of the available width. I used a barrier strip for the transmitter connection because some transmitters do not have one side of the key connection grounded.

The Keyall HV interface sits in-line between my key and the transmitter. The key terminals now have less than 3 volts between them. The two C cells should be good for over 500 hours of key down time.