After building/using my two C-Pole array I'm starting to rethink my plan.

KF2YN's C-Pole vertical array design calls for dedicated C-Poles (each pruned to have a 25 ohm input impedance) and phasing lines that both transform the antenna impedance to 100 ohms and set the phase delay between the two antennas. On the surface this looks doable but I've a lot of concern about getting the phasing lines right. W8WWV's measurements showed about a 4% delta as he measured the electrical length of a 17.1' long piece of coax. Also, I don't want to dedicate two C-Poles to an antenna that I won't be using much.

A local friend of mine wants to build a self supporting C-Pole antenna like mine. I can feed two verticals with arbitrary (but equal) lengths of coax and a simple Tee connector at the antenna tuner to make up for the 25 ohm combined feed impedance...no need to worry about electrical lengths. In addition, self supporting antennas can be positioned anywhere to point my signal where I want it to go that day. I can even boost the gain a little (up to 4.8 dB) by separating the antennas 5/8 wavelength.

It's still August, I should have another couple of months of outside weather here in Minnesota.
Posted by Niel - W0VLZ at 7:23 PM No comments: 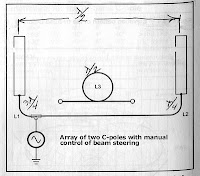 I learned a little along the way about...
This antenna array may be a good alternative for someone with properly located supports but my typical picnic table operating style doesn't always allow that. This was as interesting exercise but I'll probably keep using my single C-Pole when I'm at the park.
Posted by Niel - W0VLZ at 4:15 PM No comments: