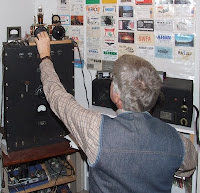 Well, it's in the log...the first QSO. Tonight I worked Lou, VE3AWA, on 3565. We were 549-559 both ways and had a nice contact going until 80 meter QRM caught up with us. Lou was using his Push-Pull TPTG transmitter with a NC101X. I had my HRO Sr paired with the Hartley running 10 watts input and about 3 watts out.

For this contact I added an extension to the main tuning capacitor shaft. Both my TNT and this Hartley are really sensitive to hand capacity. Adding 8" to the tuning shaft helped a lot as I moved onto frequency. I also used a VT-25, the military version of the type 10.

Not obvious in the Hartley list of parts are the National Velvet Vernier dials used by Ross Hull. These make a big difference adding mechanical bandspread to help overcome the 80 meter CW band being crammed into a few degrees of capacitor rotation at one end of its travel.

Lou asked how come my signal was so stable. Antennas swinging in the wind typically shift the transmitter frequency as the load changes. My 105' inverted "L" happens to be a little low (only 10-20' off the ground) and behind a ridge so it is protected from the west winds. I also run with the antenna loosely coupled to the transmitter. Output is only about three watts instead of the 5-6 watts the transmitter is capable of at maximum coupling.

The RF choke is now one I hand wound on a 3/4" piece of wooden rod like Ross Hull's original 1928 design. It doesn't have quite as many turns as he called for but it works fine.
Posted by Niel - W0VLZ at 9:27 PM No comments:

After a little debugging it works!

When I first put power to my version of Ross Hull's Hartley transmitter I could only get it to oscillate if the cathode clip is either not attached at all or clipped to the tank coil near the plate (rather than grid) end. RF with the clip this high on the tank coil is detectable on a nearby receiver but not measurable at the transmitter antenna.

It turned out that all things that look like RF chokes don't make good RF chokes. Mine from my junque box looked like a single layer vintage RF choke, it tested good for continuity and B+ showed up at the tube socket but didn't work well in this circuit. Replacing it with a
more modern RF choke fixed my problem. I'll need to go back and hand wind one like shown in the original 1928 QST article.

Now with 300 V B+ and about 25mA input I can push it to over three watts out. Backing off gives me a clean 2 watts out.

Thank you to several AWA friends that helped with parts and advice.
Posted by Niel - W0VLZ at 12:48 PM No comments: 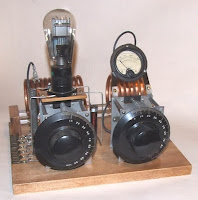 Except for a couple of coil clips my clone of Ross Hull's 1928 Hartley is complete. It's ready for power and checkout.
Posted by Niel - W0VLZ at 4:07 PM No comments: 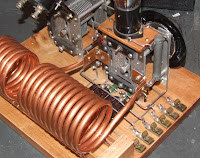 Today we have surface-mount-technology, before that we had pin-in-hole printed circuit cards, before that point-to-point wiring and before that we had breadboards. With breadboard construction came solid bus bar wiring. Bus bar is stiff enough that wiring takes on a 3D sort of aspect. Wiring of a transmitter such as this Hartley has height along with depth and width.
Posted by Niel - W0VLZ at 9:31 PM No comments: 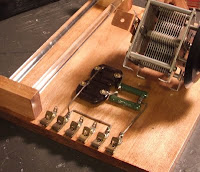 Working through this project has given me a new appreciation of the homebrewing skills of many of the hams during the twenties and thirties. The article on this particular transmitter has some gaps in the construction details....for coil turn information the builder is referred to the coil photo, to count the turns himself....and....Keying method is a reference to another chapter and, again, left to the builder to figure out.

I chose cathode keying for my version. I also buried the cathode resistors under the tuning capacitor. Keying added two additional Fahnestock clips along the left hand side. From the front mine lays out as keying (hot side), keying (ground side), filament, filament, B-/ground and B+.
Posted by Niel - W0VLZ at 8:35 PM No comments:

That pile of old parts, wood and copper tubing is starting to look like a transmitter. The eight parts left are mostly to be wired into place so things should speed up a little.

The unsung hero of any project like this is a drill press. Without one you could never get all of the holes right.
Posted by Niel - W0VLZ at 4:56 PM No comments:

With (plexi)glass rods ordered and one additional National DX capacitor in the mail from a friend the next step is some table saw time.
Posted by Niel - W0VLZ at 9:53 PM No comments: