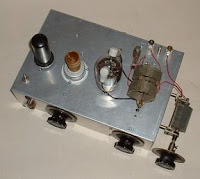 I have a working 815 transmitter. Unfortunately I had to "glue" a capacitor on to the side of the chassis to do it. Key to getting the final to work into a variety of loads is some sort of antenna tuner. Adding a capacitor into the grounded side of the output link does just that. The added capacitor does output loading . Tune up now amounts dipping the final with C2 and increasing/decreasing the loading with the added output link capacitor. Typical operation is 50 watts input and 35 watts out.

Eventually the loading capacitor will be hidden behind a front panel.
Posted by Niel - W0VLZ at 9:58 PM No comments:

QRP (and a little homebrew)

After a couple of days of on and off rain with cool weather here in SE Minnesota, today was sunny and temperature about 70 ... great evening for a picnic and a little QRPing from the park. We chose to go to Florence Park in Stewartville, MN. With my K1 and 67' endfed wire in a tree, 20 mtrs sounded pretty dead. An early CQ did raise K9PWK but QSB was bad and we lost each other before we really had much of a QSO (he gave me a 229). Finally at 6:45 Terry, N4IY, in Borden, IN came back to me. We had a nice QSO. His 4 watts was doing a fine 579 job.

On the homebrew 815 transmitter front I've been trying to get the final coil wound so that the transmitter delivers full output to a 50 ohm load. At this point I'm about to add an outboard antenna tuner to my project list.
Posted by Niel - W0VLZ at 8:07 PM No comments: 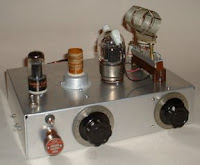 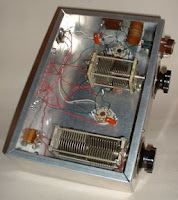 I've powered my new transmitter up on 40 meters.

For use during this test phase I built an adapter to allow the use of B&W 5 pin JVL transmitter coils instead of winding coils on my National coil forms. I'm also temporarily connecting the bias and voltage dropping resistor networks to the back 12 terminal barrier strip. This way I can easily play with the resistor values to get the right voltages.

I've still problems, though. The 815 screen current won't come down. It appears to draw around 60 mA rather than 15. High screen current causes the screen dissipation to be exceeded, maybe damaging the 815. Right now I'm looking for another 815 to compare readings with.
Posted by Niel - W0VLZ at 8:30 PM No comments:

I aquired another radio last week. This one I "won" through ebay. The pictures posted on ebay showed a fairly ughly set with three mis-matched dials. The layout, though, suggested the "Three Tube Regenerative Receiver of Unusual Performance" by George Grammer and written up in the January 1933 issue of QST. 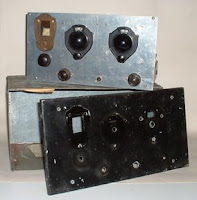 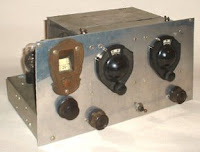 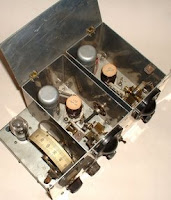 I bid and the gamble paid off. Underneath the flaking paint front panel and cabinet was a fairly nicely done version of George Grammer's design. 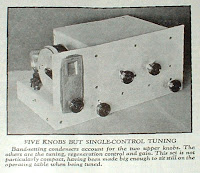 George grammer's original article was more than another construction project. He spent a large part of the article talking about features of good regen receiver design before describing "a practical receiver". This receiver includes a tuned RF stage and general coverage/bandspread tuning. Bandspread tuning is via the drum dial at the left after the detector and RF stage bandset capacitors are set. The receiver showed up in the ARRL handbooks through 1937.
Posted by Niel - W0VLZ at 12:42 PM No comments: