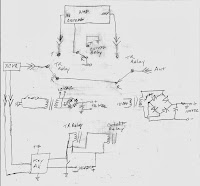 When I use the relay box and my amp, the KX3 antenna tuner has to stay in the circuit in order to match the transceiver to the uncontrolled input impedance of the amplifier. In addition the antenna relay can not follow break-in CW keying without losing the first dit so I must use the KX3 in PTT mode. On the plus side I run about 80 watts to the antenna instead of 4, maybe not a big deal for CW but real help for SSB.
Posted by Niel - W0VLZ at 5:34 PM No comments: