For a few days at the end of June we had a family houseboat vacation. 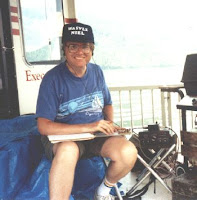 It's been several years since I've operated houseboat mobile. The first was in 1992 operating on Shuswap Lake, BC using a Heathkit HW9 and Hustler Mobile whip antenna.

The second time was in July 1995 operating on Lake Roosevelt, WA using the same HW-9 but with an endfed wire antenna.

This time we were in Voyageurs National Park on the northern Minnesota / Canadian border. I used my KX3 and twin lead fed 20 meter zepp.

For the antenna support I had one of my 16' crappie poles strapped to the upper deck railing. My antenna is 34' long with a 14' feedline. With this support it formed an inverted V sort of antenna with the far end dangling off the end of the boat...a prime example of "any antenna beats none at all". I did manage some QSOs, though, working WG0AT, N6TEM, VE3TLO and KD8DEU.

I had hoped to get on a little for Field Day but June weather in the Upper Midwest tends to be a little unsettled. This June was no exception. On Saturday June 25 we had thunder storms in both the morning and the evening plus we were under a tornado watch that evening.
Posted by Niel - W0VLZ at 7:23 PM No comments: