In the November 1955 issue of QST I found this accolade to the Push-Pull TNT transmitter:


A Pair of 45s in Push-Pull
The words of
Keith S. Williams, W6DTY 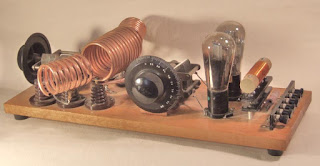 The other day a few of us were sitting around chewing the fat, mostly cussing QRM, 'phone, c.w., single sideband, narrow-band f.m., Novices, old timers, the FCC, the ARRL, and the like. Joe Twerp, a ham of fairly recent vintage, remarked, "Seems like everybody you work nowadays has a Monster III transmitter. I'll bet it's used by more hams than any other single rig in the history of radio."

There was a general nodding of heads, all except for me and Hiram C. Hartley. Hiram turned to me and said, "Keith, do you recall the 'Complete Amateur Transmitter for Forty-Five Dollars'?"

History's Most Popular Ham Transmitter was first described in QST for November, 1930, in an article by George Grammer. Its immediate popularity was due to several causes, probably the most important being the Depression. It was pretty tough to keep beans on the table and a signal on the air at the same time. The standard transmitter of the day was a single 210 tube in a Hartley oscillator with 550 volts on the plate. This was a self-controlled transmitter, by the way, directly or inductively coupled to the antenna. Only rich guys had crystals and only a few were so far advanced technically that they could build a transmitter with two or more stages. Type 10 tubes cost money, and the power supply necessary in order to get decent output was almost out of the question for the majority of hams, whose billfolds were completely flat. A majority of broadcast receivers in 1930 used a pair of 45s in the audio output stage, with a Type 80 rectifier in a 350-volt power supply. Therefore. 45s and 80s were comparatively cheap and plentiful, and the corresponding power supply components were easy to acquire. The Type 45 had been a widely used audio tube for some time, but the manufacturers stated emphatically that the tube was not suitable for use as an oscillator so hams hadn't tried it in transmitters.

Grammer's article in QST stated that all parts for the push-pull 45 rig could be purchased new for $45.00 or less. Actually, the only parts ordinarily bought and paid for were the power transformer, filter choke and wet electrolytic filter condenser. All other parts, including the pair of 45s, were usually scrounged. (Many were the families who couldn't hear Morton Downey because Junior had pinched the 45s out of the family BC set and was upstairs stoking them up on 80.) In some cases the quarter-inch copper tubing for the tank coil had to be bought, but even this item could usually be managed without breaking the piggy. bank. The rig was built on breadboard. Well, it was actually built on anything handy, but rigs in QST were always built on real, honest-to-gosh. breadboards — the kitchen-cabinet variety. It was a push-pull self-controlled oscillator. It had a medium high-C plate tank for a modicum of frequency stability, an untamed grid coil, an antenna tuning condenser, and two or three small parts. It was simple to build and sure-fire in operation — the answer to a ham's prayer.

The appearance of this rig in QST coincided with a tremendous upsurge in the ham population. With the Depression, a large number of people found themselves with time on their hands. Those who couldn't get a steady job selling apples began to take up inexpensive hobbies in order to keep occupied while waiting for the NRA and the return of beer and light wines. Ham tickets began to be issued in droves. Commercially built ham gear, except for a few items like the National Thrill Box and the Pilot Super Wasp, was almost nonexistent and it was a rare would-be ham who could afford ready-made equipment, anyway. However, with Grammer's contraption you could get on the air for next to nothing and enjoy the thrill of talking to distant places by short-wave radio! Practically every new ham built the push-pull 45 transmitter and started out pounding brass on 80-meter c.w. Old timers who built a new rig in those days usually ended up with a pair of 45s in push-pull. Beginners generally started on 80 meters because self-excited transmitters usually tended to behave in a civilized manner on that band but could be unmanageable brutes on the higher frequencies. The push-pull 45 rig I had on the air in 1932 was very tame on 80 — most of the reports I received were either "PDC" or "NDC" and once in a while some liar would give me a "XTAL PDC" report and I would like to bust with pride. But on 40 meters, although the rig put out gobs of r.f., the note sounded like a buzz saw ripping through knots; on 20 meters the 45s ran red-hot and smoking while putting out about two watts to the antenna. I must say others had better luck.

Yes, indeed, that push-pull 45 rig was without doubt the most popular ham transmitter ever to be seen in W-land. After Hiram C. Hartley mentioned it the other day I got to pawing back among the stacks of old QSL cards stowed away on a closet shelf. I picked up a batch of old cards, circa 1932. Out of the first 38 cards, 24 cards said, "XMTR: PAIR 45s IN PP." That's 63 per cent, and I can easily believe that from 1931 to 1934 at least 63 per cent of all hams in this country were using that identical rig.


( Reprinted with the permission of the ARRL. Copyright ARRL.)