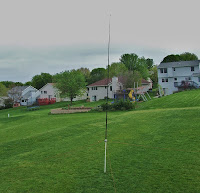 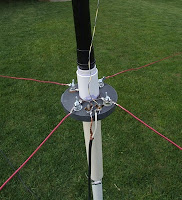 This past weekend we had nice weather here in southern Minnesota....mostly sunny and temperatures around 70. I spent some time working on a new portable antenna and then using it on the air.

I was looking for something simpler than my 20 Meter Crappie Pole Vee dipole. I decided to try a quarter wavelength vertical. The March 2010 issue of QST has a good article on ground systems for vertical HF antennas. Based on that I concluded that a 1/4 wave length vertical with only 4 elevated resonant radials should perform fairly well. What I ended up with is a 16 1/2' crappie pole on top of a 4' base section. The crap 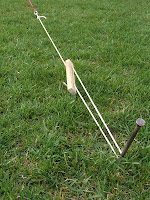 pie pole itself is non-conductive fiberglass. It serves only as a support for the vertical wire. The guys at the top of the base section are 14 gauge stranded copper wire. These are trimmed to resonate on 14.05 MHz and serve as antenna radials sloping from 4' at the base of the vertical to about 1' were they are each tied off with adjustable lines.

On Saturday while using this antenna and my K1 I worked WA0FJT in Independence, MO on 14.050. There was some QSB but our 5 watt CW signals were usually 589 both ways. I got on the air again on Sunday afternoon and worked WB4YXD (New Mexico), N4HUS (Arizona), W2LG (Florida) and KB2DHG (New York). All came back to my CQs on a fairly quiet/vacant band. Via email I even received a reception report from W1CTT (Maine).

The antenna seems to be fairly effective but the elevated 16' radials could be a problem, especially in a full campground or picnic area. I'll look some more for a 20 meter self supporting antenna that fits better into an average campsite
Posted by Niel - W0VLZ at 3:49 PM