A friend of mine noticed that my National SW-4 shown 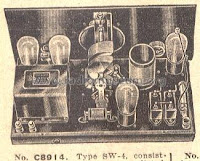 at http://www.prismnet.com/~nielw/nat_list/sw4.htm uses what looks like standard SW3 type audios as opposed to the National "Duo Cou

mentioned in the SW-4 ad. Other National radios show a production process that used parts that were available. Close inspection and comparisons between National receivers of the same model can show undocumented differences in details. Are this audios replacement parts or do they reflect a production change to take advantage of existing stock?

As I looked at these audios I saw something else. Close inspection of my SW-4 bakelite chassis showed three large plugged holes and several plugged small bolt holes. Parts mounting and the quality of the work makes it appear that all of this chassis rework was done before most of the parts were mounted. Why all of the extra plugged holes? Was the chassis originally drilled for another product and then reworked? Was the chassis made from a piece of bakelite that already had a few holes in it? Did a worker make several errors that had to be fixed before the chassis could be used?

There are a few SW-4s still around. I wonder, do they show similar changes and reworks? Were these sorts of production techniques common or is this really a set that was carefully reworked at some point after it left the factory?
Posted by Niel - W0VLZ at 10:46 PM