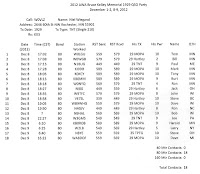 This past weekend I was able to put a 1929 transmitter on the air and participate in the AWA Bruce Kelley Memorial 1929 QSO Party.

I stayed on 80 meters making 18 contacts. Stations worked were as far west as VE7SL in British Columbia, as for east as N1BUG in Maine and even a little south to N4GJV in North Carolina. 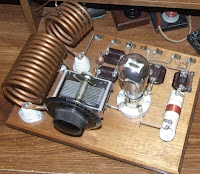 This year I used a transmitter I acquired from Vance, K5CF (SK). Vance, my step father, gave me my novice test in 1966. He enjoyed ham radio for over 70 years. Several years ago Vance encouraged me to participate in the 1929 QSO Party. Vance's transmitter is a TNT (or Tuned plate Not Tuned grid) transmitter using a single type 210 tube. With 340 volts on the plate it runs 9 watts input and about 2 watts out. Vance built his transmitter based on the one Bill Orr described one in the January 1973 issue of CQ but the original design dates from the 20s. See the December 1929 issue of QST for George Grammer's version of the same transmitter. For an antenna I used a 105' end fed inverted L only about 15' off the ground.
Posted by Niel - W0VLZ at 6:17 PM