A Choke Balun for Phased C-Poles 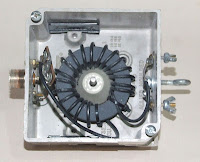 It is important that the baluns used in a phased verticals match, otherwise the phasing, beam pattern and gain won't be as planned. They also must handle the high common mode potential at the feedpoint. KF2YN shows two different balun designs in his April 2004 article. One is just multiple turns of 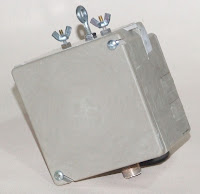 coax wound around a piece of PVC pipe while the second uses a ferrite core. The ferrite core design, while more expensive, also has much less power loss. For my phased verticals I chose Brian's toroid design. It uses 19 turns of RG-1 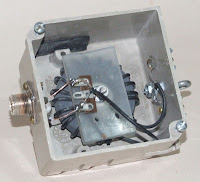 74/U coax wound on a FT-240-67 core. I mounted mine in plastic electrical boxes with an eye-bolt to allow hanging from the bottom C-Pole 40" spacer. This balun does no impedance transformation. The balun coax is simply in series with the antenna feedline.